It has been a bit since I posted an update on Joey, so here is a small one. 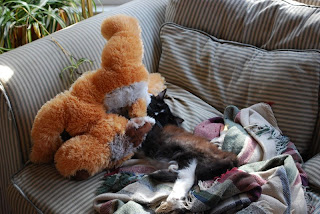 As you can see he is pretty content, and the leg in the forefront is the broken one, as such, he is pretty well mended. While the leg still has more rehab in terms of buildlng muscle and flexibility, he is a happy cat.
Posted by David at 9:58 AM No comments:

Quick update on Joey. He had his splint replaced twice. This weekend he wore it out again, and it needed to be replaced again. However, rather than spend that money on a new wrap for about a week, we had the vetrinarian run x-rays and based upon the clean look of the mend, he is now operating under his own power.

Since he has not used his leg for so long, he is now much less mobile as he slowly recoups his leg muscles. Once the fur grows back from the rubbing/tape, we will take some photos of him and his recovery.
Posted by David at 10:02 AM No comments: 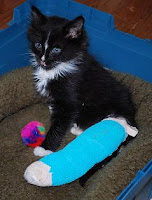 What I am reading now...